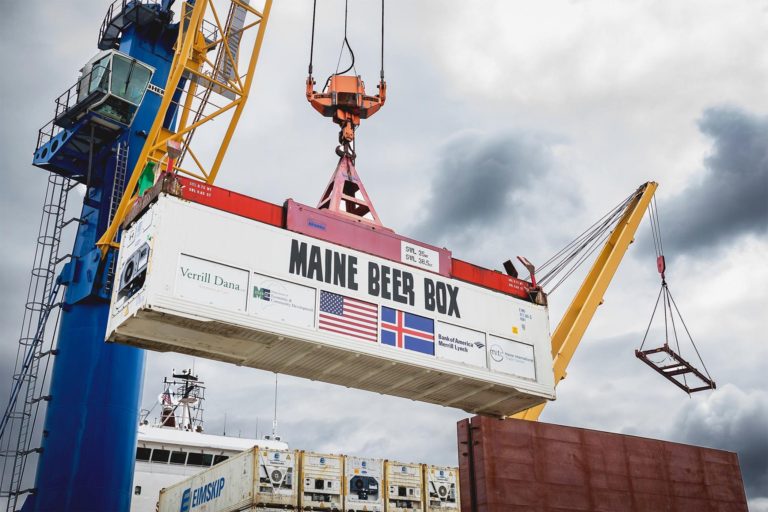 The Maine Beer Box is a custom-built, 40ft., refrigerated shipping container with 78 beer taps and a self-contained draft system that was commissioned in 2017 by the Maine Brewers’ Guild. Serving as a symbol of the collaborative spirit of Maine and American craft brewing industry,  the Maine Beer Box is utilized as part of a multi-year project based around a global exchange of beer between brewers from Maine and countries around the world.

The Maine Beer Box has been called the world’s largest mobile kegerator and is fully capable of delivering beer anywhere by land or sea, ensuring that Maine craft beer can be transported in ideal conditions, and served fresh off the tap.

In June of 2017, the Maine Brewers’ Guild (MBG), Maine’s trade association for craft beer brewers, brought together Maine’s brewers to launch this multi-year project based around a global exchange of beer. This project is done in partnership with Eimskip ehf., an Iceland-based shipping company with its North American headquarters in Portland, ME.

The key aspect of the project is that it is reciprocal: Maine brewers ship beer over, share beers from the Maine Beer Box at a festival, then ship the host country’s beers back to Maine and host them at their annual international beer festival.

The Maine beer box is part marketing initiative, part goodwill trade mission, part economic development initiative. As a result, the Beer Box was filled with Maine craft beer and shipped to Iceland in year one (2017), where the beer was offered to paid attendees at the biggest beer festival in Icelandic history.

The beer, including beer from Maine and every brewery in Iceland, was poured directly out of taps fabricated into the side of the container at a sold-out event on June 24th in Reykjavik.

Icelandic brewers reciprocated the exchange by shipping their beers to Maine via the Maine Beer Box, as well as attending and pouring their beers at the Maine Brewers’ Guild Summer Session beer festival on July 29th, 2017 in Portland, Maine.

In 2018, Maine brewers returned to their roots – shipping over 500 kegs of beer to the Leeds International Beer Festival through the port of Grimsby, England and poured beer to over 12,000 attendees over 4 days. In return, brewers from all over the United Kingdom shipped kegs back into Maine and were featured at the Winter Session International Beer Festival in late 2018 in Portland.

In August 2019, the Maine Beer Box was featured at the Seaport Beer Festival in Halifax, Nova Scotia, Canada. Over 25 Maine breweries made the trip north and dozens of Maine breweries sent beer.

The brand new container itself was donated by the Icelandic shipping company, Eimskip ehf., and fabricated by Maine tradesmen including SnapSpace Solutions, Zajac LLC, and employees of Marshall Wharf Brewing Company and Matheson Gases.

Having a Big Party? Rent the Maine Beer Box!

The Maine Beer Box can be shipped anywhere in the world (by land or by sea!) and ensures quality beer can be poured regardless of the outdoor environment. All rental proceeds go to benefit the nonprofit Maine Brewers’ Guild and our work to promote and protect Maine breweries.